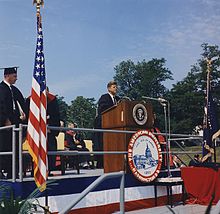 Although John Kennedy had shown some liberal and anti-colonialist leanings on certain issues throughout his political career, he began his presidency as a firm believer in the Cold War narrative.   He had even campaigned on the promise of fixing the reported missile gap the U.S. had with the Soviet Union – a gap he found, after taking office, did indeed exist but very much in the U.S.’s favor.

Early in his presidency, Kennedy was flabbergasted to hear the head of his Joint Chiefs of Staff, Curtis LeMay, and other military advisers talk seriously of a first strike nuclear attack on the Soviet Union during meetings in which estimated casualties of over 100 million Soviets and tens of millions of Americans in reprisal attacks were cavalierly tossed around.  This no doubt led to Kennedy’s decision to have meetings with his advisers during the Cuban missile crisis secretly tape recorded.  Those tapes were released and transcribed in the 1990’s, offering a window into the demented mindset of those at the highest echelons of power during the most dangerous moment in human history.  Several of those same advisers encouraged the president to escalate.  Fortunately, Kennedy had both the wisdom and the courage to resist such pressure.

Due to secret back channel correspondence that had existed between Khrushchev and Kennedy from 1961, the president had developed somewhat of a rapport with the Soviet premier.  Despite their obvious political differences, they were each aware of the pressures the other faced from hawkish factions in Washington and the Kremlin.  Nevertheless, there were many missteps and errors in judgment that led to the crisis.

Khrushchev interpreted comments made by Kennedy in a March 1962 interview with The Saturday Evening Post as a first strike threat.  This, combined with Washington’s continued actions aimed at overthrowing Soviet ally, Fidel Castro in Cuba, prompted Khrushchev to place nuclear missiles on the Caribbean island.

One of the worst moments of the crisis, when a nuclear war seemed imminent – at one point, Khrushchev ordered Soviet ships to halt just miles away from breaching the US blockade in order to de-escalate the dangerous game of chicken – actually served as a strange but powerful bonding experience for the two leaders in the sense that both men were terrified of their glimpse into the abyss and resolved to negotiate a subsequent end to the Cold War and to ensure disarmament.

This was the backdrop to Kennedy’s speech at American University the following June.  The President wanted to set the world on a path toward peaceful co-existence and believed he could work with Khrushchev toward this end.  However, he was keenly aware of both Khrushchev’s humiliation before the Kremlin hawks who saw the premier’s “retreat” during the crisis as a defeat and those in Washington who would obstruct such a policy.

Meanwhile, a nuclear test ban treaty had stalled due to disagreements over the number of inspections the Soviets would allow, fearing inspections would be used as a cover for espionage.  Kennedy realized he needed to extend an olive branch to the Soviets while also appealing to the American public, which he sensed had drawn the same lessons from the crisis and would be receptive, thereby sidestepping powerful elements who would oppose such a peace initiative.

Kennedy tapped his assistant, Theodore Sorensen, who had been with him since his days in the Senate, to draft the speech while Kennedy reviewed and advised the process.  Only a few select members of Kennedy’s staff were even aware that Kennedy planned a momentous speech as the president had learned by this point not to trust his military advisers, the CIA or the State Department.

What Sorensen and Kennedy created was a speech of great elegance and wisdom.  It has continuing relevance to U.S. foreign policy today, particularly as it relates to Russia.

Several important points were made in the speech:  First, that pursuing peace had not been treated with the same allure and fascination in our culture as war (e.g. guts and glory).

Second, he challenged the notion that pursuing peace was quixotic or too abstract.  He made the point that it could, in fact, be broken down into concrete and manageable steps if the political will was there. Indeed, if practical steps were taken toward peaceful conflict resolution, then such actions would develop a momentum of their own.

Third, he warned against self-righteousness and a superiority complex toward Russia. Furthermore, regardless of differences over politics or government, we should never dehumanize the other, but acknowledge the others’ culture and accomplishments.  This warning would prove to be particularly prophetic after the U.S.’s perceived “victory” in the Cold War and subsequent attitude and policy toward Russia.

Fourth, he recognized that we will never see the end of conflict, but we can have peaceful methods of resolving conflict.

Kennedy let the Kremlin know beforehand of his impending speech. Khrushchev’s response was very positive, allowing the speech to eventually be heard and read uncensored throughout the Soviet Union, which normally spent significant resources jamming all western broadcasts.  Unfortunately, the speech was largely ignored or ridiculed in the U.S.

Or read the transcript here: