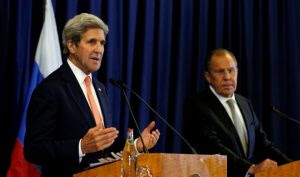 Russian Foreign Minister Sergei Lavrov and U.S. Secretary of State John Kerry have finally hammered out a ceasefire agreement for Syria, but according to both Russian and Western media reports, many important details are not being made public.   RT reports the following:

Russia and the U.S. have agreed on a new ceasefire plan on Syria that includes a ban on government airstrikes in certain areas and cooperation on strikes against jihadists, Russian foreign minister Sergey Lavrov announced on September 9 after the marathon talks with the U.S.’s John Kerry.

Opening the much-awaited press conference after some 13 hours of talks, Kerry said that the two have agreed on a comprehensive approach to Syrian reconciliation. He called “on every Syrian stakeholder to support the plan that the United States and Russia have reached, to … bring this catastrophic conflict to the quickest possible end through a political process.”

According to Kerry, the plan is to ensure that Syrian government forces will not carry out combat missions where the so-called moderate opposition is present.

Speaking of fight against Al-Nusra and its efforts to blend with moderate rebels, Kerry stressed “going on Al-Nusra is not a concession to anybody” but “is profoundly in the interests of the U.S.”

Kerry also outlined an establishment of the Russian-U.S. Joint Implementation Centre (JIG) that would serve the purpose of “delineation of territories controlled by Al-Nusra and opposition groups in the area of active hostilities.”

Taking the floor, the Russian FM confirmed that Russia and U.S. had agreed to coordinate airstrikes in Syria, “provided there is a sustained period of reduced violence.” The first step toward the implementation of this clause will be a 48-hour ceasefire in Syria, Lavrov said.

Lavrov elaborated that the ceasefire comes into effect on September 12 and should last for at least seven days. “After the ceasefire regime will be in effect for seven days, we will establish an implementation centre, in which the military and the representatives of Russian and U.S. intelligence will handle practical issues, separating terrorists and opposition,” he added.

The Russian FM said that the diplomats have negotiated on five separate documents at the talks. “Despite the mistrust and attempt to disrupt what we have agreed upon, we managed to work out a package of documents, there are five of them. It allows us to set an effective coordination in the fight against terrorism, to expand the humanitarian access to distressed population, first and foremost in Aleppo,” Lavrov said.

Due to the sensitive nature of the information contained in the agreements, they will not be made available to general public, Lavrov said. “We cannot make these documents public. They contain rather serious, sensitive information. We don’t want it to fall into hands of those who would surely try to disrupt the implementation of the measures stipulated within in the framework of humanitarian delivery supplies and in other parts of our agreements.”

Analyst and international law expert, Alexander Mercouris, has speculated that keeping many of the details secret likely means that it was Washington that made significant concessions:

Essentially, on a preliminary and strictly provisional view, the new agreement is simply a reworking of the previous agreement the US and Russia agreed with each other in February, whilst taking into account the changes in the front lines that have taken place since then.

The February agreement failed to work, leading to more fighting, which resulted in the Syrian army gaining much more ground than it controlled in February, so that it is now in a much stronger position in Damascus and Aleppo than it was in February.

Presumably there is something in the new agreement which the US and the Russians think will make it succeed where the February agreement failed.  A reasonable guess is that it is this, whatever it is, which is so embarrassing to one side or the other that it is why the agreement cannot be made public.

At the risk of making a very big guess that may be completely wrong, if it is true as the Russians say that the Syrians and the Iranians have approved the agreement then the major concession – whatever it is – which is being kept secret has most probably been made by the US.

The fact that it took the US more than 9 hours (not 5 hours as some reports say) to agree to the plan after Kerry referred it to Washington for approval also suggests that it is the US which has made the major concessions, and that the terms of the agreement – whatever they are – ran into strong criticism and opposition in Washington from the hardliners.

Time will tell if the ceasefire is indeed successful.  Meanwhile, the U.S. Peace Council recently held a press conference in which they reported on the results of their fact-finding mission to Syria in which they spoke to a cross-section of Syrians as well as president Assad.

I encourage everyone to watch the 49 minute press conference here:

For those who don’t have the time, I will sum up the main points of what the member of the delegation found out:

-members of the delegation included males and females and peace activists, including those with backgrounds in trade union movements and restorative justice

Things are not going well for Ukraine.   The New York Times reported that  earlier this month hundreds of Roma Gypsies were run out of a Ukrainian town in retaliation for a fatal attack on a child, which was not even perpetrated by a Roma.

Several dozen people in a Roma community in southern Ukraine were forced to flee their homes after a mob tore through their neighborhood over the weekend, breaking windows, tearing down fences and even setting a house on fire while the heavily outnumbered police stood by and watched.

The violence in the small town, Loshchynivka, was touched off after a local man was arrested on Saturday in connection with the rape and killing of a 9-year-old girl. A Ukrainian rights organization, the Kharkiv Human Rights Protection Group, noted that the man was not Roma.

Nicolai Petro, an academic expert on Russia and Eastern Europe, has written an article at The National Interest, detailing surveys among Ukrainians in which they express the sense of the country being “tense” and even “explosive.”

The survey, which was conducted in Odessa, Ukraine’s third-largest city, suggests that over half of Odessans describe their city as “tense,” while nearly ten percent say it is “explosive.” But even more interesting is that Odessans view the situation in Ukraine overall as much worse, with over ninety percent describing it as either “tense” or “explosive”!

Lest readers think that Odessa is an anomaly, I should point out that these results do not differ substantively from surveys conducted in February or June2016, which show a steady decline in public trust in government since the 2014 Maidan uprising.

How did things get so bad? Part of the fault certainly lies with the IMF’s austerity recommendations, which the vast majority of Ukrainians view as both harmful and pointless. But no downward spiral in public confidence could ever be so complete without the connivance of government officials. To put it bluntly, government policies have seemed, at times, almost intentionally designed to fuel public anger.

A good example is the policy of actively curtailing Russian investment in Ukraine. While this has reduced Russia’s economic influence in the Ukrainian economy, as the government intended, in the absence of commensurate Western investment to replace what was lost, major industries have collapsed, and the country’s standard of living along with them. If the country continues on its present course, Odessa’s reformist governor Mikheil Saakashvili has noted sarcastically, Ukraine will not reach the level of GDP it had under former president Viktor Yanukovych for another fifteen years.

People might even be willing to view this as a necessary sacrifice in times of war, but for the fact that Ukrainian oligarchs often continue to line their own pockets by doing business in Russia. This includes President Petro Poroshenko himself, whose personal wealth increased sevenfold in 2015.

Unfortunately, there does not appear to be a light at the end of the tunnel for Ukrainians any time soon as Bloomberg reports that, a year after reaching a deal with the IMF to restructure its debt, the Ukrainian bond market is again tanking.   Furthermore, Graham Stack and Ben Aris have written an in-depth report for Business New Europe detailing Ukrainian president Petro Poroshenko’s corrupt governance.

When Ukraine’s president, Petro Poroshenko, was swept into power following the Euromaidan protests two years ago, he promised to sell most of his business interests to avoid any conflicts of interest. “We are going to embed new traditions. I will make a point of selling my assets immediately after occupying the post,” Poroshenko promised in the run-up to the presidential election that he won in 2014.

Yet two years later and he has sold nothing. Quite the opposite in fact; according to the Organized Crime and Corruption Reporting Project (OCCRP), in 2015 not only did President Poroshenko’s personal fortune rise to $858mn, he was the only one of Ukraine’s wealthy businessmen to see his net worth actually increase that year.

Poroshenko, it seems, has continued building an empire centred on a holding company registered in Kyiv, called Prime Assets Capital, of which he is beneficial owner, according to the Ukrainian corporate register. Poroshenko holds 60% in International Investment Bank (not to be confused with the Moscow-based multilateral development bank of the same name) via Prime Assets Capital and directly, according to National Bank of Ukraine data. The bank acts as the financial node of a tangled web of companies and investments that is as active today as it ever was.

And Poroshenko is not acting alone. His two longstanding business associates, who hold stakes in many of his businesses, have followed him into politics, but remain key players in the Poroshenko financial-industrial group, a bne IntelliNews investigation can reveal.

Poroshenko has thus blurred the line between business and politics, deflected the anti-corruption efforts at every turn, and the businesses and politicians associated with him are flourishing at a time when Ukraine’s economy is mired in its worst crisis since the country’s independence in 1991.

Of course, this all begs the question:  what was the Maidan uprising all about?  After nearly 100 people killed in a violent coup and the deaths of nearly 10, 000 people in eastern Ukraine from the subsequent “anti-terrorist” operation by Kiev (the actual number of deaths is probably much higher as estimated by German intelligence in 2015), Ukraine has an economy and standard of living in much worse shape than before, along with a president that appears to be every bit as corrupt as Yanukovich.

6 thoughts on “US & Russia Agree to New Ceasefire Plan in Syria, But Details are Hush-Hush; US Peace Council Holds Press Conference on Their Fact-Finding Mission to Syria; More Trouble for Ukriane”