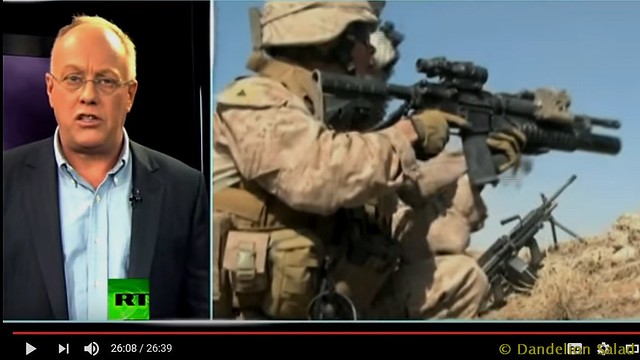 On this week’s episode of On Contact, Chris Hedges takes an in-depth look at the 16-year-old conflict in Afghanistan with Matthew Hoh, a Marine Corps veteran and diplomat who resigned his State Department post in Afghanistan in protest over the war. RT Correspondent Anya Parampil looks at the decades of U.S. involvement in Afghanistan.

A few days ago, Jimmy Dore did a show deconstructing how misleading a recent CNN segment on what’s going on in Libya was.   CNN started it’s timeline after the overthrow of Qaddafi and conveniently left out how the various militias fighting for control of the country emerged and who has been backing them.

As Dore shows, it’s not like this important contextual information isn’t out there.  Hillary Clinton’s emails, which were voluntarily released at the beginning of 2016, revealed that the desire to overthrow the Qaddafi government (which had always allowed women’s rights and had achieved the highest standard of living in all of Africa with a welfare state that would put Scandinavia to shame) was primarily driven by then-French president Nicholas Sarkozy who wanted to acquire control of Libyan oil, maintain influence in the former French colonies of Africa, and to stop Qaddafi’s plan to establish a gold-backed currency that would have provided African economic independence.   The emails also show that western special ops agents were in country at the beginning of the protests, creating provocations.   Genocide by NATO-backed “rebels” against black Libyans who were considered to be loyal to Qaddafi are also documented.