UKRAINE: ZBIG’s GRAND CHESSBOARD & HOW THE WEST WAS CHECKMATED

Zbigniew Brzezinski’s The Grand Chessboard: American Primacy and Its Geostrategic Imperatives has long been the operative canon for  State Department Hawks, Neoconservatives and Russophobes. Since the fall of the Soviet Union, the implementation of Zbig’s Grand strategy has moved at a feverish pace, gobbling up former Soviet satellites and then converting them into NATO forward bases. The endgame for the West, via these moves, has always been to quash Russian and ostensibly Chinese independence, economic viability and, thus, their ability to project power in Eurasia.

Ukraine: ZBIG’s Grand Chessboard & How the West Was Checkmated speaks to the historical and geostrategic moves by the West to control the Eurasian landmass: the broken promises and treaties, the geostrategic missteps and, finally, how Grand Chessboard fundamentalism actually catalyzed Russia’s re-emergence as a global power, shifted geostrategic power eastward and, proverbially, snatched defeat from the jaws of a U.S./NATO victory.

Natylie Baldwin lives in the San Francisco Bay Area. Her fiction and nonfiction have appeared in various publications including Sun Monthly, Dissident Voice, Energy Bulletin, Newtopia Magazine, The Common Line, New York Journal of Books, OpEd News and The Lakeshore. She is a graduate of Cal State East Bay and also enjoys walking, hiking, the beach, movies, and classic television dramas.  She is currently working on two novels.

Kermit E. Heartsong a San Francisco native and author has written three non-fiction books —The United States of Mammon (2013), Illusions, Dystopia & Monsters (2013) and the Fourth Horseman (2014). Heartsong, an empirical scientist, has been a keen observer of the macroscopic developments of social, economic, and political systems for the past twenty-five years. He has been featured in Entrepreneur, Entrepreneur Young Millionaire, Success, Essence, and in author Carol Adrienne’s The Story of Your Life. 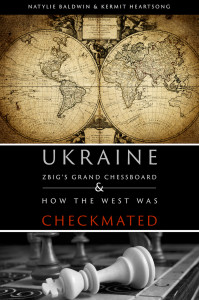 “This book puts all the relevant facts — those I knew and many I didn’t — together concisely and with perfect organization. It does it with an informed worldview. It leaves me nothing to complain about at all, which is almost unheard of in my book reviews. I find it refreshing to encounter writers so well-informed who also grasp the significance of their information.”

–David Swanson, author and co-founder of World Without War

“A powerful antidote to mainstream propaganda about the Ukraine Crisis. NATO leaders should read it to avoid sleepwalking into war with the superpowers of the 21st Century.”

“From Zbig’s nineties’ strategy for US supremacy to the return of Nazism in Ukraine, courtesy of Neo-cons, and how the Bear and the Dragon are check-mating it across the Eurasian heartland. An outstanding example of collaborative writing.”

“For those still taken in by the official Washington/Western narrative regarding events in the Ukraine, Baldwin and Heartsong’s book provides a meticulously documented and highly engaging account that all but trashes that narrative. More revealingly, for those still inclined to embrace America’s self proclaimed stature as a force for good in an increasingly unstable, chaotic and hostile global environment, the book will give them pause for deeper reflection. The source of most of that instability, chaos and hostility becomes clear for all but the most ideologically myopic and imperially inclined.”
– Greg Maybury is a freelance writer who frequently contributes articles to Op Ed News, Consortium News, and Russia Insider, among others. He also writes and edits the Pox Amerikana blog (poxamerikana.wordpress.com)