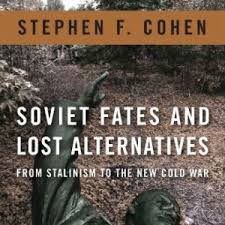 “In Washington DC, one feels the rarefied air of a Himalayan peak.  Seen from the grandiose palaces of the administration, where the fate of the world is decided, foreign people look small, primitive and largely irrelevant.  Here and there some real experts are tucked away, but nobody really consults them.”
-Uri Avnery

Avnery’s observation about American foreign policy and the attitudes behind it was made in the context of the Israeli-Palestinian conflict.  But it is an apt description of American leaders’ foreign policy in general, and pretty much regardless of which party is in charge at any given time.  Cohen’s book about the history of the Soviet Union (and later the Russian Federation) and the inevitable exploration of America’s attitude toward and relationship with the Russians seems to reinforce Avnery’s insight, particularly after the end of the Cold War.

Soviet Fates and Lost Alternatives covers roughly the time between Lenin’s death, which fueled a brutal rivalry for who would become his successor, and the present day.  It focuses on the concept of exploring possible alternatives that were potentially available in the Soviet Union/Russia at various points throughout that historical timeline.

Cohen is a recognized scholarly expert on the Stalin era and the attendant terror that gripped the Soviet Union during his 20 plus-year reign.  A whole chapter is devoted to this and the political and psychological ramifications of it are explored throughout the rest of the book as well.  Stalin’s successor Nikita Khrushchev, who admitted that he had plenty of blood on his hands from Stalin’s era, comes across as a deeply courageous and tragic figure who in the course of a few years freed all of Stalin’s prisoners, made some attempt to reintegrate them into society and publicly repudiated many of Stalin’s excesses.  He also attempted to reform the system with some limited success and many failures amid a conflicted Communist Party leadership.  He was eventually removed from power in 1964.

There is much else that is interesting and insightful offered in the coverage of the mid-1960’s to the mid-1980’s, including an examination of whether the Soviet Union could have been reformed, but in light of current events, the rest of this review will focus on Russia after the end of the Cold War as it is the most instructive for understanding the present foreign policy mess surrounding Russia and the West.

Vladimir Putin is a flawed leader, but one who is, upon closer and more thoughtful examination, not the imperialistic, anti-Western, anti-democratic cartoon character that many of our leaders and members of the mainstream media make him out to be, with that portrayal, of course, being ratcheted up recently.  Instead, what emerges is a more nuanced picture of a somewhat conflicted leader who, according to Cohen, has supported democratic policies at times and opposed them at times.  Despite claims by pundits that he single-handedly controls every aspect of Russian society, Putin must lead amidst conflicting attitudes in the Kremlin toward the West and the policies associated with the West.

To understand where that ambiguity, and sometimes outright hostility, comes from, one must understand the actual historical experience of the Russian people in relation to Western policy.

A quote from Putin that is trotted out by many commentators in an attempt to demonstrate an irrational nostalgic yearning for the Soviet Union and his grand ambitions to revive it is a comment he made during a domestic speech in 2005 wherein he stated that the collapse of the Soviet Union was the greatest geopolitical tragedy of the 20th century.  (1)

It should be noted that, according to Cohen, a majority of Russians also regret the end of the Soviet Union.

To understand what Putin might have actually meant by that statement, why it reflects the view of most Russians and to understand the conflicted attitudes of the Kremlin toward the West, it is imperative to take a look at how the relationship between Russia and the West, primarily the United States, evolved after the negotiated dissolution of the Soviet Union in 1991.

As documented by other historians as well as Cohen, during that negotiated dissolution in which the Warsaw Pact military alliance was rendered defunct, a gentleman’s agreement was entered into by the Bush I administration, specifically through Secretary of State James Baker, that in return for allowing the reunification of Germany and its admission as a NATO member, NATO would not be extended further east.  This promise was broken first by the Clinton administration and then by Bush 2 who spearheaded the admission of seven more Eastern European nations into NATO including three former Soviet republics, reinforcing Russia’s perception of being militarily encircled.  The obvious question to ask is why we needed to keep NATO if the reason for its existence had disappeared?   Bush 2′s Senior Director for Russia on the National Security Council admitted that an alternative that was not pursued by the U.S. was to dissolve NATO and create a new pact that reflected new global realities and eventually included Russia – a lost opportunity that would have fateful consequences.  (2)

This refusal in Washington to give up the Cold War mentality was foreshadowed as early as 1989 when Cohen relates a debate he was invited to participate in with a Cold-War professor before the Bush I administration over the possibility of a U.S.-Soviet strategic partnership:  “Declarations alone could not terminate decades of warfare mentality….Many of the top level officials present clearly shared my opponent’s views, though the President did not.” (p. 171)

Then, there is the shock therapy that Russia allowed Western elites to administer to its citizens during the 1990’s under the guise of modernizing and marketizing its economy.  It’s a crucial enough point to justify quoting Cohen at length:

“[Boris Yeltsin under the advisement of American elites] adopted a “shock therapy” program that immediately ended Soviet-era price controls and other consumer subsidies and privatized the state’s most valuable assets, from natural resources, large industries, and banks to rail transport.

The result was the worst economic and social catastrophe ever suffered by a major nation in peacetime.  Russia sank into a corrosive economic depression greater than that of the American 1930s.  Investment plunged by 80 percent, GDP by almost 50 percent; some two-thirds of Russians were impoverished; the life expectancy of men fell below 59 years; and the population began to decline annually by almost a million people.  In 1998, with nothing left to sustain it, despite several large Western loans, the Russian financial system collapsed.  State and private banks defaulted on their domestic and foreign obligations, causing still more poverty and widespread misery.  (p. 26; emphasis mine).

These events put Putin’s words into a more sober and perfectly rational context – what he probably meant was that after the Soviet Union’s exit from the world stage, Russia had been too trusting of the West’s motives and made too many concessions that had come back to bite it in the ass, leaving a lot of destabilization in its wake. Not to mention, it left the world with a lone empire that acts drunk on triumphalism.

Putin’s attitude toward the U.S. has been fairly consistent in his speeches and interviews during his tenure as President and Prime Minister of the Russian Federation:  calling out the U.S.’s most reckless policies, hubris and double-standards while leaving the door ajar for cooperation.

That opening for cooperation seemed to be paying off during the brief period in 2013 when Putin and Obama had established enough of a rapport to actually start working together to address serious geopolitical issues, like avoiding a U.S. military invasion of Syria based on what turned out to be unreliable evidence of the Syrian government’s responsibility for a chemical weapons attack (3) and negotiating a solution to the Iran nuclear problem.  As investigative journalist Robert Parry reports, Putin pissed off the neoconservatives by thwarting their plans for more regime change in the Middle East.   (4)

In light of this post-Cold War history, we have the Ukraine crisis that developed as the co-opting of grievances by citizens of Ukraine, particularly the western part of the country which leans more toward Europe, by American agents to foment a coup as admitted by Assistant Secretary of State for European and Eurasian Affairs Victoria Nuland in cahoots with American ambassador Geoffrey Pyatt. (5) It should be noted that Nuland is married to influential neoconservative Robert Kagan and shares the neocon world view of regime change at America’s whim.   Though Ukrainian president Viktor Yanukovych’s administration was corrupt, he was democratically elected.   Of course, this is not the first time American officials have been involved in overthrowing democratically elected leaders it feels don’t serve its interests, regardless of the interests of the people actually living there and platitudes about democracy.

As Cohen has commented in interviews about the Ukraine crisis, preventing a country literally on its doorstep from joining NATO is now an existential issue from the perspective of Russian security in a post-Soviet world order that has been less than hospitable. Anyone who had any real knowledge or understanding of Russia’s interests and the history of the last 23 years could have predicted this whole fiasco.  Cohen’s basic analysis is echoed by other experts on Russia such as former CIA analyst Ray McGovern and ex-diplomat John Matlock. (6) (7)

If we really want a more democratic and open society in Russia and elsewhere, we would be better advised to not encourage government leaders’ more autocratic tendencies by backing them into corners where they must worry about their sovereignty and independence rather than allowing them the space to develop their own society in their own time, consistent with their own history and culture.

One of the most insightful observations in the book comes from Cohen’s analysis of comments made by Yegor Ligachev, a moderate-conservative Communist Party reformer who had a complicated alliance with Gorbachev during the glasnost/perestroika era:  “Ligachev has been proved right about one essential issue:  Russia can borrow from the West but it cannot transplant an American or other Western style system into its native soil, as was attempted so disastrously in the post-Soviet 1990s.”  (p. 83).