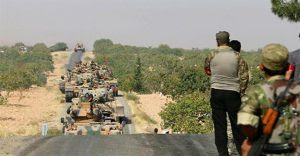 Secretary of State John Kerry and Russian Foreign Minister Sergei Lavrov ended a marathon session of diplomatic talks on August 26th no closer to agreement with respect to Syria.   The Duran reports:

On the key political question – the Geneva peace process and the future of President Assad – they are as far apart as ever. The U.S. continues to insist that President Assad must go as the inevitable of any peace settlement. The Russians say that is strictly for the Syrian people to decide. There was clearly no movement by either side on this issue.

This is against the backdrop of Turkey’s invasion of Jarablus in northeastern Syria, a move some have reported as supported by the US military, in order to keep a supply line to the jihadist mercenaries (“rebels”) fighting against the Syrian government in Aleppo.  Alexander Mercouris – with the help of military analyst Mark Sleboda – provides more details:

In the immediate aftermath of the Turkish capture of Jarablus in Syria, Turkish President Erdogan telephoned his “friend Putin” on Friday 27th August 2016.

The Kremlin’s account of the conversation is remarkable even by its standards for its terseness: “The two leaders discussed the development of Russia-Turkey trade and political and economic cooperation in keeping with the agreements reached in St Petersburg on August 9. Vladimir Putin and Recep Tayyip Erdogan exchanged opinions on developments in Syria and pointed out the importance of joint efforts in fighting terrorism. They agreed to continue their dialogue on the issues of the bilateral and international agenda.”

The true subject of the discussion will in fact have been the Turkish capture of Jarablus in northern Syria.

The Russian media meanwhile is carrying articles making clear the extent of Russian anger. An article in the Russian newspaper Kommersant, which is clearly based on official briefings, is accusing Turkey of “going further than promised in Syria”. That this article reflects official thinking in Moscow is shown by the fact that the semi-official English language Russian news-site Russia Beyond the Headlines has republished it in English.

The article makes it clear that Turkey did not coordinate the Jarablus operation with Moscow or Damascus, and that it was much bigger than Moscow was led to expect. The Russians are also clearly annoyed by the extent to which the operation has been coordinated by Turkey with the U.S., which is providing air support.

….Mark Sleboda has explained to me that the principal corridor to supply the rebels in Syria has always been through the area of north east Syria around Jarablus. In his words:

Idlib is not an acceptable supply route from Turkey to forces in Aleppo province because the Turkish-Syrian border in Idlib is mountainous terrain – small and bad roads and then long routes all the way through Idlib past SAA-held territory into Aleppo province. The Jarablus Corridor north of Aleppo is and has always been absolutely vital for the insurgency. That’s why Turkey, Brookings, etc have always placed so much priority on a no-fly zone there. Now it has come to realisation.

In other words, the Turkish capture of Jarablus before it could be captured by the YPG was not primarily intended to prevent the linking together of two areas within Syria under Kurdish control – though that may have been a secondary factor – but was primarily intended to secure the main supply route (or “ratline”) Turkey uses to supply the Jihadi fighters attacking Aleppo.

Interestingly, Brett McGurk, the special presidential envoy for the coalition to counter ISIS, took to Twitter to express the US’s displeasure with Turkey’s campaign in Northern Syria.  One of the tweets reads:

DOD: The United States was not involved in these activities, they were not coordinated with U.S. forces, and we do not support them.

It is difficult to believe that Turkey’s actions weren’t at least given a nod and a wink by somebody in Washington, especially after Biden’s bizarre comments about the Kurds a few days ago when he had his wingding with Erdogan.

“We have made it absolutely clear,” he said, that Kurdish forces “must move back across the river. They cannot, will not, and under no circumstances get American support if they do not keep that commitment, period.”

As Daniel Lazare points out at Consortium News, Obama’s foreign policy is a ball of confusion. 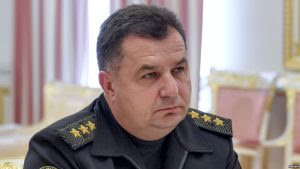 (Stepan Poltorak, Minister of Defense of Ukraine since October 2014; https://www.newcoldwar.org/russian-investigators-launch-war-crimes-case-ukrainian-defense-minister/)

RT is reporting that Russia’s Investigative Committee, a special committee that investigates high-profile cases, has opened a criminal case against the Ukrainian Defense Minister, Stepan Poltorak, for war crimes against civilians in Donbass:

In a statement published on the agency’s website, the Investigation Committee said it had obtained enough proof that crimes against civilians in the self-proclaimed republics of Lugansk and Donetsk had been committed on the orders of top Ukrainian military commanders.

The Investigative Committee also stated that Ukraine had repeatedly violated the ceasefire agreement signed on February 15, 2015, and that during these violations Ukraine’s National Guard used heavy artillery to deliberately destroy various installations of civilian infrastructure and indiscriminately used heavy weapons in populated areas, killing and injuring civilians. At least seven civilians were killed as a result of these actions and 74 were wounded, including seven children. Military analyst, The Saker, has reported that, on August 25th, Putin ordered the Russian military to do snap military exercises in the southwestern regions of the country.

Russian Army units as well as the Air Force, Airborne Troops and the Navy’s Northern Fleet have been put on high alert as part of a large-scale snap exercise which the Defense Ministry says will check troops’ readiness to tackle emerging crises.

“According to the decision of the Commander-in-Chief of the Armed Forces [President Vladimir Putin], a regular snap exercise begins today,” Defense Minister Sergey Shoigu said at a briefing with top military commanders on Thursday.

“Troops in the Southern Military District, some units of the Western and Central Military Districts, as well as the Northern Fleet, the Air Force and the Airborne Troops, are to be put on full alert starting from 7.00am [local time],” the minister added.

Finally, I’d like to take a moment to promote John Pilger’s latest thought-provoking piece on the western mainstream media’s role in propagating lies and misinformation that enables warmongering.  I read Pilger’s classic book “Heroes” when I was in college and have admired his award-winning investigative journalism ever since.  Among other points in this piece, Pilger discusses a fact that has not been reported on in the mainstream media – and hardly in the alternative media – that Slobodan Milosevic was basically cleared of the charges against him by the International Criminal Tribunal for the former Yugoslavia (ICTY) in The Hague:

The exoneration of a man accused of the worst of crimes, genocide, made no headlines. Neither the BBC nor CNN covered it. The Guardian allowed a brief commentary. Such a rare official admission was buried or suppressed, understandably. It would explain too much about how the rulers of the world rule.

The International Criminal Tribunal for the former Yugoslavia (ICTY) in The Hague has quietly cleared the late Serbian president, Slobodan Milosevic, of war crimes committed during the 1992-95 Bosnian war, including the massacre at Srebrenica.

Far from conspiring with the convicted Bosnian-Serb leader Radovan Karadzic, Milosevic actually “condemned ethnic cleansing”, opposed Karadzic and tried to stop the war that dismembered Yugoslavia. Buried near the end of a 2,590 page judgement on Karadzic last February, this truth further demolishes the propaganda that justified Nato’s illegal onslaught on Serbia in 1999.

Milosevic died of a heart attack in 2006, alone in his cell in The Hague, during what amounted to a bogus trial by an American-invented “international tribunal”. Denied heart surgery that might have saved his life, his condition worsened and was monitored and kept secret by US officials, as WikiLeaks has since revealed.

Milosevic was the victim of war propaganda that today runs like a torrent across our screens and newspapers and beckons great danger for us all. He was the prototype demon, vilified by the western media as the “butcher of the Balkans” who was responsible for “genocide”, especially in the secessionist Yugoslav province of Kosovo. Prime Minister Tony Blair said so, invoked the Holocaust and demanded action against “this new Hitler”. David Scheffer, the US ambassador-at-large for war crimes [sic], declared that as many as “225,000 ethnic Albanian men aged between 14 and 59” may have been murdered by Milosevic’s forces.

This was the justification for Nato’s bombing, led by Bill Clinton and Blair, that killed hundreds of civilians in hospitals, schools, churches, parks and television studios and destroyed Serbia’s economic infrastructure.  It was blatantly ideological; at a notorious “peace conference” in Rambouillet in France, Milosevic was confronted by Madeleine Albright, the US secretary of state, who was to achieve infamy with her remark that the deaths of half a million Iraqi children were “worth it”.

Albright delivered an “offer” to Milosevic that no national leader could accept. Unless he agreed to the foreign military occupation of his country, with the occupying forces “outside the legal process”, and to the imposition of a neo-liberal “free market”, Serbia would be bombed. This was contained in an “Appendix B”, which the media failed to read or suppressed. The aim was to crush Europe’s last independent “socialist” state.

Once Nato began bombing, there was a stampede of Kosovar refugees “fleeing a holocaust”. When it was over, international police teams descended on Kosovo to exhume the victims of the “holocaust”. The FBI failed to find a single mass grave and went home. The Spanish forensic team did the same, its leader angrily denouncing “a semantic pirouette by the war propaganda machines”. The final count of the dead in Kosovo was 2,788. This included combatants on both sides and Serbs and Roma murdered by the pro-Nato Kosovo Liberation Front. There was no genocide. The Nato attack was both a fraud and a war crime.

All but a fraction of America’s vaunted “precision guided” missiles hit not military but civilian targets, including the news studios of Radio Television Serbia in Belgrade. Sixteen people were killed, including cameramen, producers and a make-up artist. Blair described the dead, profanely, as part of Serbia’s “command and control”. In 2008, the prosecutor of the International Criminal Tribunal for the Former Yugoslavia, Carla Del Ponte, revealed that she had been pressured not to investigate Nato’s crimes.

This was the model for Washington’s subsequent invasions of Afghanistan, Iraq, Libya and, by stealth, Syria. All qualify as “paramount crimes” under the Nuremberg standard; all depended on media propaganda. While tabloid journalism played its traditional part, it was serious, credible, often liberal journalism that was the most effective – the evangelical promotion of Blair and his wars by the Guardian, the incessant lies about Saddam Hussein’s non-existent weapons of mass destruction in the Observer and the New York Times, and the unerring drumbeat of government propaganda by the BBC in the silence of its omissions.