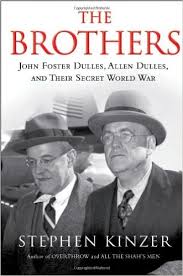 In this presentation, journalist Stephen Kinzer talks about his book, The Brothers, about Allen Dulles and John Foster Dulles.  Allen was the head of the CIA from its inception, pursuant to the National Security Act of 1947*, under president Truman, through Eisenhower’s administration and into Kennedy’s.  John Foster was Secretary of State for a good portion of his brother’s reign at the CIA (Dulles Airport is named after him).  Kennedy fired Allen Dulles in 1962 for the Bay of Pigs debacle in which the CIA tried to mousetrap the president into invading Cuba.  In this presentation, Kinzer discusses the three factors that influenced the Dulles brothers’ ideology and how it has carried over in our national security policy and philosophy.  (57 minutes)

*The creation of our current national security apparatus, including the CIA, can be traced back to the National Security Act (NSA) signed by President Harry Truman in 1947 designed to “contain” the Soviet Union, which Truman and his staunchly anti-Communist advisors had decided was going to be the next enemy after WWII.   Truman’s Secretary of State George Marshall had warned him at the time of the potential unaccountability and abuse of the agencies being created by this legislation, stating that it especially granted the CIA powers that were “almost unlimited.”  The particularly egregious sentence cited by most critics of the NSA of 1947 is one that allows a president to direct the CIA to “perform such other functions and duties related to intelligence affecting the national security….”