As some readers familiar with my past writings will already know, there were high-ranking individuals in the U.S. military who had advisory positions to the president and advocated a first-strike nuclear attack on the Soviet Union during the first Cold War.  These advisers even encouraged President Kennedy to escalate during the Cuban Missile Crisis of 1962.  By then, Kennedy had learned of the madness with which he was dealing and had his meetings with his national security advisers secretly tape recorded during the crisis. The transcripts are available for reading in the form of a book.

I have also discussed, to some extent, the warped cultural and ideological thinking that can produce such individuals in both my review of JFK and the Unspeakable by James Douglass and this post.

John Marshall’s must-read article at Consortium News “Dreams of Winning Nuclear War on Russia” covers some of this background and discusses the findings of a new disturbing analysis put out by the Bulletin of Atomic Scientists about the cutting edge new technologies that could make it even more tempting for such ideologues to consider a first-strike on Russia.   An excerpt is below:

In 1961, senior Pentagon consultants drafted a 33-page blueprint for initiating — and winning — a nuclear war against the Soviet Union. It was based on top-secret intelligence that Soviet nuclear forces were few in number and poorly defended — making them an easy target for a U.S. preemptive strike.

Convinced of U.S. superiority, the Joint Chiefs of Staff began advising President John F. Kennedy to risk nuclear war over Cuba and Vietnam — even though their own analysis conceded that if something went wrong, 75 percent of Americans might die. If JFK hadn’t rejected their advice, we might not be here today.

President Trump may soon face a similar test. With almost no public awareness, the Pentagon’s nuclear program has achieved unprecedented capabilities that once again raise the possibility that a U.S. first strike could cripple Russia’s nuclear arsenal and “decapitate” its leadership. Such capabilities all but ensure that hawks will begin lobbying for more aggressive measures toward Russia, based its growing vulnerability to U.S. nuclear weapons.

A frightening new analysis for the Bulletin of the Atomic Scientists — by three eminent strategic arms experts at the Federation of American Scientists, Natural Resources Defense Council, and MIT — provides evidence that U.S. nuclear planners have “implemented revolutionary new technologies that will vastly increase the targeting capability of the US ballistic missile arsenal,” giving it for the first time in decades “the capacity to fight and win a nuclear war by disarming enemies with a surprise first strike.”

The concept of nuclear superiority seemed to lose its relevance in the mid-1960s, when Moscow finally built a large enough nuclear arsenal to withstand attack. Subsequent arms control treaties, starting in the Nixon years, maintained reasonable parity between U.S. and Russian nuclear forces, discouraging either side from contemplating the use of atomic weapons for anything but deterring a nuclear attack.

With absolutely no fanfare, however, U.S. technology advances have once again called mutual deterrence into question. The secret is a “super-fuse” first implemented by the U.S. Navy in 2009 as part of its “life-extension” program for submarine-based nuclear missiles. By permitting more accurate timing of nuclear blasts, this flexible trigger gives America’s sub-launched missiles three times their former killing power — enough to take out even “hardened” Russian missile silos and command centers with a high probability of success.

The authors calculate that a mere 272 warheads could wipe out all of Russia’s intercontinental ballistic missiles housed in hardened silos — leaving in reserve more than 600 lethal warheads deployed on U.S. submarines, as well as hundreds more on U.S. land-based missiles.

Although U.S. war planners would still be challenged to target warheads on Russia’s submarines and mobile land-based missiles, the authors support claims by other scholars that “for the first time in almost 50 years, the United States stands on the verge of attaining nuclear primacy.” Russia’s vulnerability will likely increase over time, as the Pentagon’s implements its planned trillion-dollar nuclear “modernization” program over the next 30 years.

Here’s what would happen if the bomb targeted Times Square in New York City: 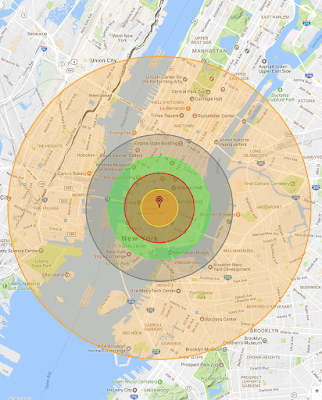 Here’s what would happen if the bomb targeted Red Square in Moscow: 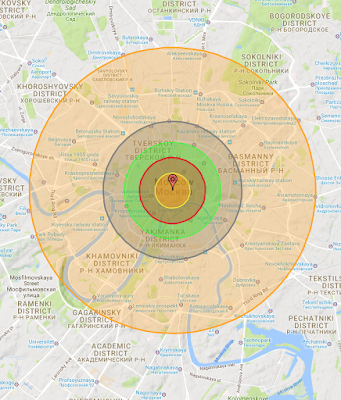 For a primer on how easy it would be for an accidental nuclear war to be launched, due to either human or technological error, read Eric Schlosser’s “World War III, By Mistake” from a recent issue of The New Yorker:

The dangers of “launch-on-warning” have been recognized since the idea was first proposed, during the Eisenhower Administration. After the Cuban Missile Crisis, McNamara advised Kennedy that the United States should never use its nuclear weapons until a nuclear detonation had occurred on American soil, and could be attributed to an enemy attack. The first Minuteman missiles had already become a great source of stress for McNamara. The control system of the original model had a design flaw: small fluctuations in the electricity entering the command center could mimic the series of pulses required by the launch switch. An entire squadron of fifty missiles might be launched accidentally without anyone turning a key. “I was scared shitless,” an engineer who worked on the system later confessed. “The technology was not to be trusted.” McNamara insisted that the control system be redesigned, at great expense. The destruction of fifty Soviet cities because of a mechanical glitch, a classified history of the Minuteman program later noted, would be “an accident for which a later apology might be inadequate.”

It should be noted that Russia has not been resting on its laurels when it comes to maintaining, and even improving, its nuclear defense capabilities.  Over the past year it has begun rolling out its S500 air defense system, which some geopolitical analysts suggest would be able to completely seal off Russian airspace to incoming missile attacks after its implementation all over the country.