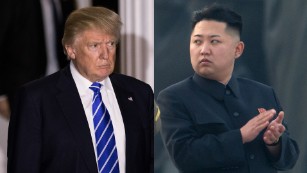 Since there has been so much escalating rhetoric with the North Korea situation, I’ve decided to devote this post to that topic.  On Monday, North Korea’s spokesperson at the ASEAN conference criticized the latest sanctions that were unanimously passed by the U.N. Security Council:

It has been reported that the sanctions will decrease North Korea’s income from exports by approximately 1/3 (or ~$1 billion).   However, Lawrence Wilkerson provided some context of the impact of the sanctions during a recent interview at the Real News Network:

LARRY WILKERSON:  …but let’s face it, North Korea, as you’ve just described it is a place where these sorts of sanctions that the United States thinks it can use against very sophisticated, basically industrial or post-industrial economies, simply don’t have any impact, particularly when the two staples, the real things that North Korea needs to survive and regime survival is all they’re really interested in, are the heavy fuel that China provides them and the hard currency that they earn from the relationships they have with everyone from proper Chinese authorities to the Triads in China, the criminal gangs with whom they deal.

Wilkerson goes on to describe how negotiations might be pursued between Washington and North Korea:

The real message here has come somewhat sotto voce but nonetheless it has come from Tillerson and his comments recently and also from the president of South Korea. Those comments indicate that both men, Tillerson and the president are interested in talking with North Korea. The statements they’ve made reflect knowingly and smartly and wisely the program that former Secretary of Defense Bill Perry suggested in an interview with Senator Sanders on the latter’s radio show recently. That is that we have to negotiate. We have to talk. We have to have something we can give them, and they have to have something they can give us.

A suggestion would be that the exercises in August we plan with the South Koreans for example, we would forgo those, we would not have them, in exchange for North Korea’s not doing any more nuclear tests or perhaps even any more ballistic missile tests in addition to that. That would be a good beginning. Then we could start talking about what North Korea is really concerned about and that is the fact they think the United States is going to attack them. They think these exercises on the peninsula are very provocative in that sense, and I would too, if I were in Pyongyang. I’m not excusing the criminality of this regime in Pyongyang. I’m just stating what is reality.

In an interview with Amy Goodman, investigative journalist Allan Nairn reiterated the same points about the rationale for North Korea’s position:

ALLAN NAIRN:  ….In many ways, Kim Jong-un is—comports himself like a crazy person, as does Trump, but there is an underlying rational incentive for the North Korean regime to get nuclear weapons, as [Director of National Intelligence Dan] Coats just acknowledged. You know, they always say there are no good options regarding North Korea. Well, there are no good military options. But as part of their goal of regime survival, one thing that the North Korean regime has always said is that they have two principal goals. One is to stop the U.S.-South Korean military exercises, which are provocative. And, two, end the Korean War. There’s an armistice now, but the Korean War is not formally over. That’s the kind of thing that, if the U.S. were serious, it could sit down on the table and—at the table and negotiate.

Nairn goes on to comment on President Trump’s statement this week that appeared to threaten North Korea with a nuclear attack. Subsequently, North Korea threatened the island of Guam.

In more rational times, what Trump said yesterday would be an article of impeachment. There’s been a lot of talk of impeachment from some people up to now, for things like Trump’s crimes, like racism, injustice, stupidity, regarding the threat of climate change, all sorts of things. But, in a sense, all of those things fit within the normal parameters of the U.S. presidency. Lots of U.S. presidents, at one time or another, have engaged in talk and activities like that, although none so intensively as Trump. But with what he’s doing now, provoking North Korea, risking actual destruction of part of the U.S., he is violating the system’s rules on its own terms. He’s committing an actual threat against U.S. national security. And you would think that in just pragmatic political terms in Washington, that is the kind of thing that could be grounds for impeachment. But as long as he sits in that chair, it’s true, the commanders are obligated to obey his order.

To add to the tensions, the Washington Post has reported that anonymous intelligence sources say there is an intelligence report stating that North Korea has the capability of weaponizing a miniature nuclear bomb with ICBM’s that could reach the western coast of the United States.   However, journalist Tim Shorrock, who has written extensively over decades about North Korea and just returned from a 2-month stint in South Korea, has expressed skepticism of the WaPo report in an interview with Aaron Mate at the Real News Network:

TIM SHORROCK: First of all, let’s go back to the report you mentioned at the top of the hour, which was this defense intelligence report that was leaked to the Washington Post today and reported on by three of their better reporters. I’m a little surprised by this report, because for one thing it’s clearly not the collective conclusion of the entire intelligence community. It’s someone in the DIA and there’s no real analysis of what they say. They just say it has this miniature warhead that they can now put on a ICBM. Well, they’ve said that before in years past. It hasn’t proven to be true and I’m wondering why this is coming out right now. That seems very dangerous on the face of it. Someone is trying to push, someone within the administration, within the intelligence community is pushing for a military response by leaking this kind of report.

It doesn’t have the full discussion that you usually see in intelligence reports, so I’m very skeptical of it for that reason. Going back to the sanctions, I mean, it was pretty surprising to see China and Russia vote for these very severe sanctions, which as Nikki Haley described on Sunday, over the weekend these sanctions will cut North Korea’s exports by at least 1/3 and cut very deeply into their one earnings. They could be very damaging sanctions, but what the US media never seems to pick up is what the Chinese and both the Chinese and the Russians say to the United States, which is, “Okay. We’re going to vote for these sanctions and help enforce these sanctions, but you, the United States, must proceed on a path of dialogue and negotiations to resolve this. This will not be resolved by sanctions and tough words alone.”

Sounds like Russia and China are still hoping against hope that the decisionmakers in Washington have some kind of reason that can be appealed to if they just say the right words and throw them a bone.   I’m wondering if that hope is misplaced.

Rex Tillerson appeared to be attempting to soothe international nerves after Trump’s aggressive comments on North Korea, only to have Defense Secretary Mattis undermine them with more aggressive rhetoric.  ABC News had the following details :

Speaking earlier Wednesday on his way home from Asia, he [Tillerson] credited Trump with sending a strong message to the North Korean leader on the “unquestionable” U.S. ability to defend itself, so as to prevent “any miscalculation.” Tillerson insisted the U.S. isn’t signaling a move toward military action, while it pursues a policy of sanctions and isolation of North Korea.

“Americans should sleep well at night,” Tillerson told reporters. He added, “Nothing that I have seen and nothing that I know of would indicate that the situation has dramatically changed in the last 24 hours.”

No sooner had Tillerson ratcheted down the rhetoric than Defense Secretary Jim Mattis ratcheted it back up.

Echoing Trump’s martial tone, Mattis said North Korea should stand down its nuclear weapons program and “cease any consideration of actions that would lead to the end of its regime and the destruction of its people.” As seldom as it is for a president to speak of using nuclear missiles, the reference to the “destruction” of a foreign people is equally rare.

So who to believe?   And how much clout does Tillerson have in the administration against the more aggressive members like Mattis, McMaster and Trump (at times) himself?  How much longer will Tillerson remain as Secretary of State?  Personally, I wouldn’t be surprised if Tillerson is gone by the end of the year.

One thought on “North Korea”