As reported in The Duran, recently leaked emails reveal that George Soros used his influence with many key players from Washington with respect to the Ukraine coup and its aftermath in 2014.

Soros has a history of using his network of NGO’s to foment instability in target countries in order to help pave the way for insertion of leaders who will be receptive to American corporate and geopolitical interests, while Soros often gets to profit as a carpetbagger afterwards.  The role of Soros and his network of NGO’s in the Ukraine crisis of 2013-2014 is discussed in my co-author’s half of Ukraine: Zbig’s Grand Chessboard & How the West Was Checkmated.

Soros and his NGO executives held detailed and extensive meetings with just about every actor involved in the Maidan coup…from US Ambassador Geoffrey Pyatt, to Ukraine’s Ministers of Foreign Affairs, Justice, Health, and Education.

The only person missing was Victoria Nuland, though we are sure those meeting minutes are waiting to see the light of day.

Plans to subvert and undermine Russian influence and cultural ties to Ukraine are a central focus of every conversation. US hard power, and EU soft power, is central towards bringing Ukraine into the neo-liberal model that Soros champions, while bringing Russia to its economic knees.

The leaked documents can be found here. 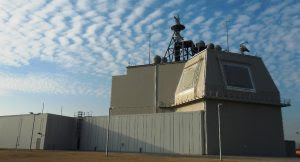 (Military base at Deveselu, Romania (photo by Lockheed Martin))

EurActiv is reporting that, as a consequence of cratered relations between Washington and Ankara in the wake of the failed coup attempt which Erdogan blames on Washington, the U.S. is in the process of removing its 50 tactical nuclear weapons from the Incirlik base in Turkey to Romania.

EXCLUSIVE – Two independent sources have told EurActiv.com that the U.S. has started transferring nuclear weapons stationed in Turkey to Romania, against the background of worsening relations between Washington and Ankara.

According to one of the sources, the transfer has been very challenging in technical and political terms. “It’s not easy to move 20+ nukes,” said the source, on conditions of anonymity.

According to a recent report by the Simson Center, since the Cold War, some 50 U.S. tactical nuclear weapons have been stationed at Turkey’s Incirlik air base, approximately 100 kilometres from the Syrian border.

During the failed coup in Turkey in July, Incirlik’s power was cut, and the Turkish government prohibited U.S. aircraft from flying in or out. Eventually, the base commander was arrested and implicated in the coup. Whether the U.S. could have maintained control of the weapons in the event of a protracted civil conflict in Turkey is an unanswerable question, the report says.

Another source told EurActiv.com that the U.S.-Turkey relations had deteriorated so much following the coup that Washington no longer trusted Ankara to host the weapons. The American weapons are being moved to the Deveselu air base in Romania, the source said.

Deveselu, near the city of Caracal, is the new home of the U.S. missile shield, which has infuriated Russia. 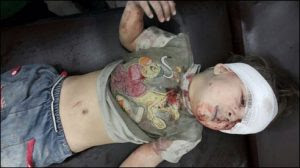 By now, many are aware of the reports of dead civilians allegedly resulting from Russian bombing runs in support of the Syrian government in the battle of Aleppo.

Russia’s Defense Ministry has announced an official denial of the charges:

Russia’s Defense Ministry has denied claims it carried out attacks on a civilian area in Aleppo’s Qaterji district. The claims were made by Western media after video and pictures of a wounded five-year-old boy from the area emerged online.

“The critical plight that the children from eastern Aleppo districts are in – unwillingly taken hostage by terrorists – is surely a tragedy,” said the official representative of the Russian Defense Ministry, Igor Konashenkov.

He criticized certain Western media for the “cynical use of this tragedy in anti-Russian propaganda material,” calling it a “moral crime.”

“We have repeatedly stressed that the Russian Air Force planes operating in Syria never work on targets within residential areas,” Konashenkov said.

“It is all the more relevant regarding al-Qaterji, mentioned by the Western media, as it is adjacent to the exit corridors for locals which were opened in the framework of the Russian humanitarian mission,” he added, as quoted in a Defense Ministry press release.

“It is done to disrupt any attempts to receive medical and other kinds of aid for eastern Aleppo residents, who are basically terrorist hostages now.

“The nature of the debris shown by Western broadcasters during the operation to save [the wounded boy, Omran Daqneesh] demonstrates that there are intact windows in a building nearby, and this in turn shows that the strike, if it happened, was carried out not using aircraft ammunition but a mine or a gas cylinder, which are commonly used by terrorists,” Konashenkov also said. 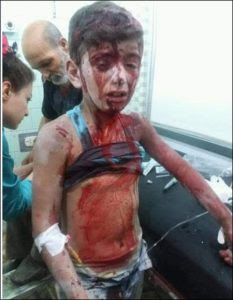 (This Syrian boy’s image did not go viral because he was injured by the extremist forces fighting the Syrian government, according to New Cold War.org’s news site (image on Twitter))

RTreports that the Russian Defense Ministry also announced that it is backing a proposal from the UN’s Syria envoy, Staffan de Mistura, calling for 48-hour ceasefires, during which the UN can deliver aid relief to civilians trapped in Aleppo.

As a means to broaden the scale of the humanitarian mission in Aleppo, the Russian Defense Ministry is ready to back the UN proposal to introduce the 48-hour pauses, which would allow the city’s population to be supplied with food and medication, and for vital infrastructure damaged by terrorist shelling to be restored, the ministry’s spokesman, Major General Igor Konashenkov, said.

A test-run of the 48-hour truces could be organized next week to see if relief can reach civilians safely.

“A more precise date and time will be determined after receiving information about the readiness of the convoys from the UN representatives and receiving confirmation of the security guarantees of their safe travel from our American partners,” Konashenkov said.

The Ministry of Defense added that Moscow is ready to discuss the issues concerning the safety of UN humanitarian convoys with Damascus and expects the same security guarantees from Washington regarding the so-called “moderate opposition” and other units.

The UN has welcomed Russia’s support of the decision to put hostilities in Aleppo on 48-hour pauses weekly to make sure humanitarian convoys reach their destinations, Farhan Haq, deputy spokesman for the secretary-general, said on Thursday.

**For in-depth and contextual background on the war in Syria, I recommend the following articles: