As an update to the last post in connection with the provocations from Ukraine into Crimea, analyst Alexander Mercouris has noted that Western governments have provided little to no public support to the Kiev government on this issue:

In the event the most surprising fact about the Crimean incident is that there have not even been the ritual statements from Western governments of support for Ukraine that I expected.  On the contrary Western governments have publicly said virtually nothing about the incident.  A meeting of the UN Security Council did take place on Thursday to discuss the incident, but the meeting took place in closed session so scarcely anything is known about it.  By contrast the calls for restraint I said would be made by the West to Ukraine in private are being made in public as well.

Meanwhile Ukrainian attempts to drum up international support have met with only a tepid response.  US Vice President Biden did speak on Friday to Ukrainian President Poroshenko.  However the White House press release on the conversation significantly fails to support the Ukrainian account of the Crimean incident.  Instead, whilst making ritual references to US support for Ukraine’s sovereignty and territorial integrity, it says that

Not only does this comment fail to back Ukraine’s account of the incident, but it puts Ukraine on the same level as Russia, implying that Ukraine needs to heed calls for “restraint” as much as Russia.  That would certainly not be what the US would be saying if it were publicly blaming Russia for the incident.

….The lack of support for Ukraine over this incident is partly explained by the fact that the Russian account of it is (as I have said previously) undoubtedly true.  Not only do all the known facts confirm as much, but Ukrainian explanations – that the shooting incident was the result of drunk Russian soldiers shooting at each other, and that Yevgeny Panov (the alleged Ukrainian leader of the spy ring) was supposedly abducted by the Russian secret service from Ukraine and smuggled to Crimea in order to give the Russian account verisimilitude – is just too fantastic for anyone to take seriously.  The Kremlin’s website shows that no Western leaders have called Putin to discuss or rather scold him over the incident.  The absurdity of Ukraine’s explanations probably means they are too embarrassed to do so.

Western governments have not however in the past hesitated to back Ukrainian accounts of incidents however preposterous those accounts might be.  The failure in this case therefore has to be taken as further evidence of Western “Ukraine fatigue” and disenchantment with the Maidan regime.

Consistent with this assessment are the public comments from Germany’s foreign minister, Frank-Walter Steinmeier in which he admonished both sides to refrain from escalation.  UPI reports the following:

German Foreign Minister Frank-Walter Steinmeier on Monday said Germany is concerned about the security situation in Crimea, adding that Russia and Ukraine “must refrain from anything that may lead to a further deterioration of the situation.”

Steinmeier met with Russian Foreign Minister Sergey Lavrov in the Russian city of Yekaterinburg to discuss Moscow’s evidence about an attack the Kremlin accuses the Ukrainian government of carrying out in which two Russian servicemembers were killed. Ukraine denies the attack took place.

“The main thing is that the situation doesn’t get out of control,” Steinmeier said. “We call on everyone to de-escalate.”

A personal contact in Yalta had the following to say when asked how things were going this past week in this scenic city in Crimea:

People go to the beach, thousands of holiday makers enjoy their time, we do feel very secure and protected.  Thousands of Russians are flying into Crimea right now for summer holidays and security measures are pretty high everywhere. So we feel no danger.  This is the view from inside. 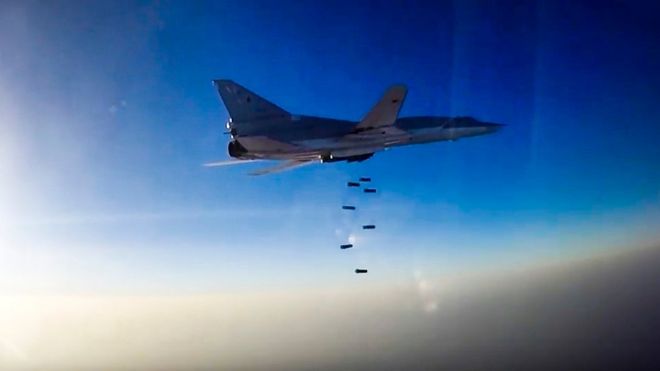 For the first time, Russian bombers took off for their runs over Syria from an air base in Iran.   The Washington Post underscored the diplomatic and geopolitical significance in their report earlier today:

….Iran has long banned foreign militaries from establishing bases on its soil. But the raids on Tuesday appeared to signal a budding alliance that would expand Russia’s military footprint in the region.

Iran and Russia “enjoy strategic cooperation in the fight against terrorism in Syria, and share their facilities and capacities to this end,” Iran’s National Security Council chief, Ali Samkhani, said Tuesday, according to the state-run Islamic Republic News Agency (IRNA).

….Russian intervention marked a turning point in the fate of the Assad regime, which had been losing ground to rebel forces. Outside the government-held side of Aleppo earlier this year, roadside billboards featured Russian President Vladimir Putin and Assad. In Damascus, keychains and mugs with the Russian leader’s picture were on sale in the city’s markets.

But until now, Russia’s long-range bombers, which require longer airstrips, had to be launched from Russian territory more than 1,200 miles away. Now, those same bombers need to fly only about 400 miles from Iran to Syria, Iran’s Fars News Agency reported Tuesday. The shorter distance will allow Russia to intensify its air campaign against rebel-held areas.

This follows the decision by Russia to go ahead and make the Khmeimim air base in Syria a permanent one, creating a presence in the Mediterranean.  More details and context with respect to this move are provided at The Duran:

Following negotiations between the Syrian government and Russia an agreement dating to 2015 has now been ratified by Russia turning the Russian air base at Khmeimim in Syria into a permanent base.  In other words Russia will retain the base at Khmeimim beyond the conclusion of the Syrian conflict, and its presence there has just been made permanent.

That the Syrian government has wanted to grant the base to Russia on a permanent basis has been known for some time.  From the Syrian point of view the Russian base not only guarantees Russia’s support for the present Syrian government but also provides Syria with a measure of protection it has never had before from Israeli air incursions. These have been a continuous reality for decades with Syria lacking the capability to prevent them.  The Russians do have that capability and the Syrians will be hoping that because of the presence of the base they will now use it to protect Syria from Israeli air incursions.  As it happens reports suggest that the number of Israeli incursions of Syrian airspace have fallen off significantly since the Russian Aerospace Forces deployed to Syria last autumn, with the Israelis now careful to keep the Russians informed of their flights.

….The military reality is that since 1943 it is the US Navy which together with its naval allies (primarily Britain and France) has been the overwhelmingly dominant military power in the Mediterranean.  Since the Second World War the Mediterranean has been in military terms an American lake.

The base at Khmeimin however is different from anything that has existed before.  Not only does it already host a formidable strike force of aircraft roughly equivalent to that of a US Navy carrier strike group, but it is heavily defended by formidable air defence assets including S400, BUK and Pantsir anti aircraft missiles, and contains a host of radar, electronic warfare and command facilities.  It is also defended by a formidable force of Russian ground troops, said to be of battalion strength.  Moreover there is talk the base is going to be significantly expanded to make it capable of hosting much heavier strike aircraft, possibly TU22M3s.  Khmeimim also forms part of what is becoming a very powerful complex of Russian military bases and facilities in Syria, which obviously include the Tartus naval facility (which may also now be expanded) and a top secret Russian listening post which has long been rumoured to exist somewhere in Latakia province.

In aggregate this is a base complex of a sort the Russians have never had in the Mediterranean before, and one that has now been made permanent.

And, in a surprise move, Putin accepted the resignation of his chief of staff and long-time friend, Sergei Ivanov.   Russia Direct has an article that gives a good run down on the relationship between Putin and Ivanov, beginning in the 1970’s when both worked for the KGB in St. Petersburg (then known as Leningrad).   However, I disagree with the conclusion expressed by the author that this move represents Putin simply trying to consolidate more power around himself.  And the author is wrong to suggest that Putin has unlimited power in Russia.  He does not and, again, anyone who studies contemporary Russia and Putin carefully knows this is not true. Putin is the one who makes the ultimate decisions on most things but he has various interests that he must consider and balance when making those decisions.   He has also had problems in the past with those lower down the bureaucratic chain not enforcing his decisions.

Alexander Mercouris provides a different perspective on the possible reasons for the shake-up:

Officially Ivanov asked to be dismissed himself having supposedly asked Putin to be appointed for just a four year term when he was first appointed, which has now run out.  Officially Ivanov has also proposed his successor – Anton Vaino  – who was previously his deputy.

It could be that all this is true.  However Ivanov is being transferred from one of the important positions in the government to one of the least important – Special Representative on Environment and Transport Issues – which is a major downgrade.  It is difficult to see in all this anything other than a major demotion.

There may be a possible hint in Putin’s comment as to the real reason for this step.  He is reported to have said to Vaino (Ivanov’s successor) that he would “like to see as little bureaucracy as possible and a more hands-on approach to solving everyday problems faced by the Executive Office, as well as in the key areas of economic development and social issues.”  There have been constant rumours going back to Ivanov’s time as Defence Minister that he is not a good manager, and in these words there may be a hint that this is the real reason he has just been removed from a post where management skills are essential.