There are conflicting reports about what came out of the much-ballyhooed meeting between Putin and Erdogan in St. Petersburg earlier this week.  The Turkish news outlet, Anadolu Agency, reported that the two nations would be establishing a joint defense mechanism, as well as increased cooperation in the economic sphere:

Speaking at Anadolu Agency’s Editors’ Desk, Cavusoglu said the previous day’s meeting between Presidents Recep Tayyip Erdogan and Vladimir Putin had paved the way for closer ties following a nine-month freeze after the shooting down of a Russian warplane.

“The officials will go to St. Petersburg tonight,” Cavusoglu said. “Our delegation will consist of foreign ministry [personnel], the Turkish Armed Forces, along with our intelligence chief.”

Cavusoglu said meetings will be held at ministerial level.

Erdogan’s trip to Russia and the revival of ties between Russia and Turkey have sparked concern that the NATO member is turning increasingly to the East as it feels rebuffed by the West over a host of issues such as EU membership and the West’s tepid response to the defeated July 15 coup.

Questioned about increased cooperation between the Turkish and Russian defense industries in the context of Turkey’s NATO role, Cavusoglu said Ankara had already established defense sector cooperation with non-NATO countries, including missile development.

“Turkey wanted to cooperate with NATO members up to this point,” the minister said. “But the results we got did not satisfy us. Therefore, it is natural to look for other options. But we don’t see this as a move against NATO.”

However, a far less rosy characterization of the substantive results of the meeting was reported by John Helmer, the longest-serving western journalist in Moscow.  According to Helmer, Erdogan essentially put the kibosh on any meaningful geo-strategic shift toward Russia during a pre-meeting interview with Russia’s TASS News Agency:

Just before Erdogan’s arrival in St. Petrersburg, he and the Kremlin agreed to stage a television interview in which Erdogan mixed several metaphors to ingratiate himself with the Russian audience. The meeting with Putin,  Erdogan claimed, is “a new landmark in bilateral relations, a clean slate from which to start anew.” Erdogan referred to the Russian president as his “dear friend Vladimir” every four minutes of the interview. Read the Tass version in English.

Erdogan did more than apologize for the shooting-down of the Russian Su-24 fighter-bomber last November. He admitted the aircraft was in Syrian airspace, not Turkish, when it was attacked. “The culprits in what happened in Syrian territory have been detained and brought to justice already. The investigation is continuing. In fact, I conveyed that in my message [to President Putin].  As for the pilots, I ordered a probe into the circumstances that occurred beyond the bounds of our customary rules of response. You also know that the man who caused the Russian pilot’s death, who killed the Russian pilot, is now in custody. He is standing trial. I would like to emphasize that.”

….[However,] Erdogan’s responses on the real agenda were as far apart as ever.  He put a stop to press hints that he is suspending his campaign to overthrow the Syrian president, Bashar Al-Assad. “We don’t want Syria’s disintegration, but the departure of Bashar Assad who is guilty for the deaths of 600,000 people. This is the condition for preventing this scenario. Syria’s unity cannot be kept with Assad. And we cannot support a murderer who has committed acts of state terror.”

He denied any role in the financing , oil trade,  weapons and other supplies for ISIS forces in Syria and Iraq.  He repeated Turkish backing for the Crimean tatars fighting Moscow with support from Kiev and Washington.

On the future of the Gazprom projects and the Akkuyu reactor, he offered more talks, no commitments. Vegetables and fruit weren’t mentioned.  As for tourism, Erdogan declared that no tourist had been killed in last month’s military putsch, and that “currently the beaches are safe.”

“Erdogan used the Tass interview to take off the table what the Russians had been hoping might be a breakthrough,” a Moscow observer noted. “He used Tass to out-manoeuvre Putin – it’s clear from the St. Petersburg record Putin wasn’t happy. Putin is the big loser from the Turkish hype – and the Russian propaganda organs, especially the English language ones, are also covering up.”

….The official record of the delegation talks, which started at 1 in the afternoon, and ended after three hours, reported no discussion and no agreement on a single Russian political or security priority.    The presidential press conference revealed that despite declarations of best intentions, nothing of importance to either side was agreed. The Russian Foreign Ministry has reported nothing on Foreign Minister Sergei Lavrov’s meeting with his counterpart…hours after it concluded. 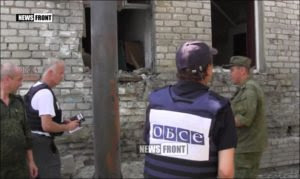 Irina Burya of the DONi News Agency, an independent Finnish media project that reports on the ground in the Donbass, states, from DPR sources, that the Kiev regime has fired over 4,000 rounds of ammunition into the Donbass territory in the space of a week, 75% of which was from heavy weapons.   Furthermore, it is reported that the Ukrainian military is building up heavy weapons on the front and Neo-Nazi militias are beefing up their presence as well:

At the same time, Kiev continues to strengthen its group with weapons and personnel in all three directions of the front. According to the DPR intelligence, tanks, 122 and 152mm howitzers, motorized artillery systems and MLRS (‘Grad’ multimple launch rocket systems) are being delivered to the Ukrainian units on the forefront in dozens. In addition, over the past week at the Donetsk segment of the front arrived about 200 radicals of the «Right Sector».

The observers of the Organisation for Security and Cooperaton in Europe (OSCE) mission also noted in their weekly report the absence of 60 tanks, 50 152mm howitzers, 24 122mm motorized artillery systems, 17 100mm anti-tank cannons and over 10 Grad MLRS at sites of Ukrainian weapons storage.

Residents of Mariupol, the largest Kiev-controlled city in the south of Donbass, informed that on the outskirts of the city, the Ukrainian military were hastily building new defenses. The local residents were surprised by the fact that these defenses were not located in the direction of the DPR but that of Ukraine. It appears that Kiev does not intend to defend the city in case of a counter-offensive of the DPR army, but seeks only to prevent its further advance after the liberation of Mariupol.

In the Lugansk segment of the front, the international observers documented the absence of 27 Ukrainian tanks, 14 152mm howitzers and 10 Grads from their storage areas. The LPR intelligence reported the arrival at Ukrainian position sof 45 tanks, 10 MLRS «Grad» and about 50 Chechen mercenaries.

In addition, LPR intelligence sources on the ground informed that the Ukrainian military were mining banks of the Seversky Donets River, which forms the contact line, and continued to seize areas of the buffer zone.

In one of the Kiev-controlled Kiev localities of the Lugansk region, the Ukrainian military seized a local clinic. Locals, who are now banned from entering it, explain this by increases in the number of non-combat losses in units of the Ukrainian army.

However, on the whole, the situation in the Lugansk segment of the front was all this time considerably calmer than in the Donetsk Republic. According to the LPR People’s Militia, over the past week, the Ukrainian side opened fire on the territory of the Republic about 900 times, including about 100 rounds from the heavy artillery.

….Last week, the head of the UN monitoring mission on human rights in Ukraine arrived in Donetsk . She visited places where Ukrainian prisoners of war are held and had an opportunity to talk with them personally. After her inspection, she said that she did not have any claims to the conditions of their detention.

At the same time, a delegation of the UN Commission on Human Rights in Ukraine was not allowed in places of political prisoners detention, after which it left the country in protest.

Last month, international observers from Germany, Finland and Serbia came to monitor the opening of the election primaries in the DPR. After spending several days in Donetsk, they made an official statement about having heard the nightly bombardments of the city from the Ukrainian side and seen their devastating effects.

The FSB has reportedly stopped two attempts by Ukrainians to cross into Crimea to cause trouble, resulting in armed clashes and two deaths.  Euronews reports the following:

The country’s FSB security service says there have been at least two armed clashes recently on the border between Crimea and Ukraine.

It also says it has dismantled a spy network inside the annexed peninsula.

An FSB employee and a Russian soldier were killed in the clashes at the weekend, according to officials.

The FSB says it tackled one group of what it describes as Ukrainian “saboteurs” in the early hours of Sunday, smashing what it says was a Ukrainian “spy network”.

Ukrainian and Russian nationals were arrested.

Twenty homemade explosive devices, ammunition, mines, grenades and weapons normally used by Ukrainian special forces were recovered, the FSBsaid, adding that there were more incidents late on Sunday and early on Monday.

“Ukrainian special forces units tried to break through two more times with groups of saboteur-terrorists but were thwarted by FSB units and other forces,” a statement said.

“The aim of this subversive activity and terrorist acts was to destabilise the socio-political situation in the region ahead of preparations and the holding of elections,” the FSB said in a statement.

….A spokesman for Ukrainian military intelligence has dismissed the claims as “false information”.

The Ukrainian Defence Ministry said in a statement that the FSB’s assertions look like an attempt to justify “acts of aggression” and the redeployment of military units to Crimea.

“Representatives of the Russian special services are trying to divert the attention of the local population and the international community from criminal acts to transform the peninsula into an isolated military base,” it said.

Neyla Miller, an American expatriate living in Moscow, writes of her impressions of Russia as she nears the one-year anniversary of her stay:

Next month will be the one-year anniversary of decision to make Moscow my new home. Though Moscow, like any major city around the globe, does not speak for the heart of its country… it does provide a rough summation of its various cultures and peoples – only highlighting what is Russian. I was lucky to have been fairly well traveled prior to my arrival, easing any culture shock. Eleven months into our relationship, I’ve noticed it’s the only city that hasn’t let me down by this marker.

A few days prior to leaving for Moscow, I was taking a walk through New York City with an acquaintance I had recently been put in touch with by a friend, whose family lives in Moscow. He is a young Russian and who just arrived in NYC to continue his studies. While snaking our way from Union Square to Little Italy, I could see him assessing the amounts of garbage on the streets and sidewalks. He politely commented it was dirtier than he imagined. This caught me by surprise, as I thought most movies set in NYC capture it quite honestly.

3 thoughts on “A Joint Defense Plan Between Turkey & Russia or a Big Letdown?; Update on Conditions in Donbass; Ukrainian Provocateurs Try to Cross into Crimea; 10 Ways Russia Surprised This Expatriate”