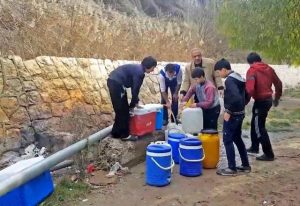 AFP reported on January 7th that repair teams were set to enter the area affected by damage to the water mains and infrastructure in Wadi Barada region northwest of Damascus.

Clashes continued there overnight and into Saturday morning, killing seven Syrian government soldiers and two civilians, the Syrian Observatory for Human Rights said. But by late morning, state media said maintenance teams had arrived in the area 15 kilometres northwest of Damascus and were “prepared to enter” to begin repair work.

A source close to the regime said a temporary ceasefire had been agreed to allow the repair crews to enter, though it could take days before the mains supply is restored.

Fighting has raged in Wadi Barada for several weeks, despite the December 30 start of a ceasefire brokered by regime ally Russia and rebel backer Turkey. The truce has held across much of the country, though it does not apply to the Daesh terror group or former Al Qaeda affiliate Al Nusra Front, now known as Fateh Al Sham Front.

On Monday, Democracy Now! reported dozens of deaths as a result of a fuel truck explosion in front of a courthouse in rebel-held Azaz in northern Syria.  No group had yet claimed responsibility.  It was also reported that airstrikes had resumed on Sunday in a rebel-held area near Damascus after the failure of negotiations with the Syrian government.

Democracy Now! reported on Tuesday that the Pentagon had acknowledged launching an air raid into Eastern Syria over this past weekend:

Unnamed U.S. officials said the raid was carried out by the Expeditionary Task Force and was aimed at capturing top ISIS militants. The U.K.-based Syrian Observatory for Human Rights says 25 people were killed in the operation. The website Deir Ezzor 24 quoted witnesses who said the U.S. troops landed by helicopter and then left an hour and a half later carrying prisoners and bodies.

Meanwhile, according to Reuters, the Syrian truce hammered out by Russia and Turkey was showing signs of strain as president Assad publicly stated his willingness to negotiate everything at the (as yet undated) peace summit in Kazakhstan:

In comments to French media [full text below], Assad also said his government was ready to negotiate on “everything” at peace talks his Russian allies hope to convene in Astana, Kazakhstan, including his own position within the framework of the Syrian constitution.

But he indicated any new constitution must be put to a referendum and it was up to Syrians to elect their president….

….Russia, Turkey and Iran, the three foreign powers involved in the latest peace drive, plan to divide Syria into informal zones of influence under an outline deal they reached, sources told Reuters in Moscow last month. But such a deal would still need buy-in from Assad, his opponents and, eventually, the Gulf states and Washington.

Rebel groups fighting under the “Free Syrian Army” banner have already frozen any discussion of their possible participation in the Astana talks.

The Syrian government dismisses opposition groups backed by Assad’s enemies as foreign creations. In his comments to the French media, Assad asked: “Who will be (in Astana) from the other side? We do not yet know. Will it be a real Syrian opposition?”

It should be interesting to see how these settlement negotiations actually play out.

And yet another government report, this one put out by the Director of National Intelligence, seeking to persuade the public that Russia hacked the US presidential election is found just as embarrassingly wanting as the last one.  Below I will provide the reactions of a few noteworthy people, starting with one of the targets of this accusation, Wikileaks’ Julian Assange, who stated in a press conference that it was not an intelligence report but an embarrassment and was a press release for political effect:

“It [the report] is clearly designed for political effect.  And US intelligence services have been politicized by the Obama administration in the production of this report and on a number of other things.”

Glenn Greenwald, appearing on CNN’s Reliable Sources explains that what has been provided by Washington so far with respect to Russian hacking constitutes not “inadequate or weak evidence, but no evidence.”  Assertions repeated over and over with the admonition by intelligence agencies to “trust us” also do not constitute evidence.  He goes on to explain why the history of the last 60 years of US foreign policy provides an excellent basis for not automatically trusting these very agencies when it comes to war and peace issues.  Watch the 4 minute and 40 second interview here:

John McAfee, the founder of the anti-virus software company, also pokes numerous technical and logical holes in the case presented by Washington and subsequently lapped up by the American corporate media on this matter.  Watch his 4 and a half minute interview with RT’s Ed Schulz:

Investigative reporter Robert Parry does his deconstruction of the latest report over at Consortium News.  The following excerpt will give you a good synopsis of the quality of the report’s evidence:

Repeating an accusation over and over again is not evidence that the accused is guilty, no matter how much “confidence” the accuser asserts about the conclusion. Nor is it evidence just to suggest that someone has a motive for doing something. Many conspiracy theories are built on the notion of “cui bono” – who benefits – without following up the supposed motive with facts.

But that is essentially what the U.S. intelligence community has done regarding the dangerous accusation that Russian President Vladimir Putin orchestrated a covert information campaign to influence the outcome of the Nov. 8 U.S. presidential election in favor of Republican Donald Trump.

Just a day after Director of National Intelligence James Clapper vowed to go to the greatest possible lengths to supply the public with the evidence behind the accusations, his office released a 25-page report that contained no direct evidence that Russia delivered hacked emails from the Democratic National Committee and Hillary Clinton’s campaign chairman John Podesta to WikiLeaks.

The DNI report amounted to a compendium of reasons to suspect that Russia was the source of the information – built largely on the argument that Russia had a motive for doing so because of its disdain for Democratic nominee Clinton and the potential for friendlier relations with Republican nominee Trump.

But the case, as presented, is one-sided and lacks any actual proof. Further, the continued use of the word “assesses” – as in the U.S. intelligence community “assesses” that Russia is guilty – suggests that the underlying classified information also may be less than conclusive because, in intelligence-world-speak, “assesses” often means “guesses.”

The DNI report admits as much, saying, “Judgments are not intended to imply that we have proof that shows something to be a fact. Assessments are based on collected information, which is often incomplete or fragmentary, as well as logic, argumentation, and precedents.”

But the report’s assessment is more than just a reasonable judgment based on a body of incomplete information. It is tendentious in that it only lays out the case for believing in Russia’s guilt, not reasons for doubting that guilt.

And last but not least, military blogger Moon of Alabama has pointed out that even members of the usual crowd of “let’s hate evil Russia” pundits have admitted the paltriness of the report’s substance, including Julia Ioffe who tweeted:

As Moon of Alabama comments:

When you lost even Julia Ioffe on your anti-Russian issue …

Clapper as DNI and Brennan as CIA chief should have been fired years ago. They will both be gone by January 20. The Intelligence Community will remember them as the chief-authors of this devastating failure.

****************************
Amy Goodman interviewed Matthew Cole, The Intercept‘s national security reporter, about his recent expose of the elite SEAL Team 6’s atrocities in Afghanistan.  This is the team that reportedly killed Osama bin Laden:

A stunning new exposé published today in The Intercept about the elite military unit SEAL Team 6 reveals a darker side of the group best known for killing Osama bin Laden. National security reporter Matthew Cole spent two years investigating accounts of ghastly atrocities committed by members of the unit, including mutilating corpses, skinnings and attempted beheadings. According to sources, senior command staff were aware of the misconduct but did little to stop it—and often helped to cover it up.

Warning:  a strong stomach is required to watch this interview or read the transcript.