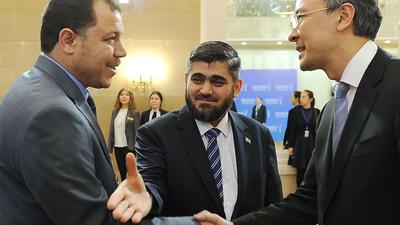 The first session of the peace talks on Syria, took place on January 23rd in Astana, Kazakhstan.  The opposition was represented by Mohammed Alloush, leader of Jaysh al-Islam.  The UN also sent its Syria envoy Staffan de Mistura to the talks, which the U.S. declined to send a delegation to but it is reported that the U.S. ambassador to Kazakhstan, George A. Krol, would be in attendance.

According to Yahoo News, the first day did not bode for a smooth negotiation process:

The talks are focused on shoring up a shaky cease-fire declared Dec. 30, not on reaching a larger political settlement. Syria’s bitter divide was on vivid display as the delegates emerged from a closed, hour-long session marked by cold glances and sharp exchanges.

The head of the rebel delegation, Mohammad Alloush, had described Syrian President Bashar Assad’s government as a “terrorist” entity. He called for armed groups fighting alongside it, including the Lebanese Hezbollah, to be placed on a global list of terrorist organizations, according to a video leaked by opposition delegates.

The talks are taking place in the aftermath of ISIS having retaken Palmyra and destroyed the facade of the historic Roman theater.   Additionally, the Syrian army has been losing its grip in Deir Ezzor, prompting the Russian air force to provide support with the TU22MC heavy bombers.  Alexander Mercouris reports on the first bombing run this past weekend:

With the position of the Syrian forces besieged in the desert town of Deir Ezzor in eastern Syria remaining extremely precarious – latest reports suggest they were forced to surrender hard-won gains they made there against ISIS yesterday – the Russians have brought the full weight of their air force to bear, striking at ISIS positions near Deir Ezzor with 6 TU22M3 bombers.

An additional bombing run took place this Monday, which Mercouris also reported on:

As the military crisis in the desert city of Deir Ezzor in eastern Syria continues, there are reports that 6 Russian TU22M3 medium bombers have again been in action against ISIS positions there.

The air strike comes two days after an earlier strike by the same group of 6 TU22M3 medium bombers.

The targets of these strikes are almost certainly not front line ISIS positions, but ISIS’s local headquarters, their supply depots and ammunition dumps, and their deployment areas.

Over time these sort of strikes degrade ISIS’s ability to sustain the attack on Deir Ezzor by depriving ISIS’s fighters there of the supplies and reinforcements they need to continue the battle.

It is the same tactic the Russian air force used successfully against the Al-Qaeda led Jihadis during their offensives to break the sieges of east Aleppo in August and September of last year.

It remains to be seen whether these strikes have come quickly enough to save the situation in Deir Ezzor.

Latest reports from there suggest that local Syrian army counter-attacks have improved the Syrian troops’ positions in the city, and that the Syrian military is now sending more reinforcements there drawn from elite Republican Guard units previously stationed in Damascus.

This past Friday, the U.S. also carried out a drone strike in Idlib that killed 100.  According to Democracy Now!: 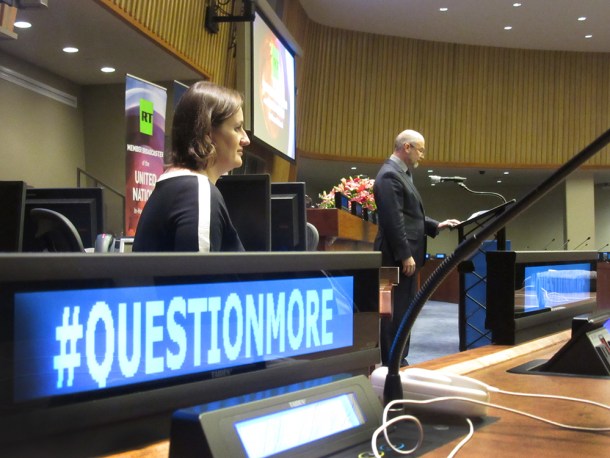 RT – that dastardly purveyor of Russian propaganda – has been invited to join the UN as an official in-house broadcaster.

A number of Russian dignitaries and media professionals gathered in Midtown Manhattan at the United Nations headquarters on Tuesday evening to mark the occasion. Speaking at the official ceremony in the UN Conference Room 4 were Russia’s UN ambassador Vitaly Churkin, UN Under-Secretary-General Cristina Gallach, and RT Director General Alexey Nikolov.

RT’s hashtag #QuestionMore could be seen on all of the UN member states’ digital desktop name displays throughout the auditorium.

Under-Secretary-General Gallach welcomed RT’s addition to the UN’s in-house network, “The UN in-house television network is viewed by UN staff members, delegates and visiting officials. It is home to a diverse range of news broadcasting networks from around the world and in different languages, and today welcome the newest member to the network.”

In an earlier press statement, RT head Alexey Nikolov said, “Today, in the era of sweeping, global political changes, it is more important than ever to consider different points of view – to compare them, to draw independent conclusions.  In just 11 years, RT has won worldwide acclaim as a go-to source for alternative perspectives on current events. The diversity of views and stories that we represent is the embodiment of the fundamental principles of the Organization. We are pleased that the voice of RT will now be heard at UN level”.

“People must have the right to know different news coming from different sources – and then make their own judgment,” said Nikolov, in conclusion to a very moving personal speech about his own family’s experience of propaganda during the mid 20th-century Soviet era.

In economic news, Alexander Mercouris discusses the Russian Central Banker’s designation by (British) Banker magazine as central banker of the year.   He also points out that Russia’s GDP may grow better than predicted, based on the results of the last quarter in 2016:

On the question of GDP growth, early indications are that it might be higher this year than earlier forecasts had predicted, with evidence in the final quarter of 2016 that the economy was recovering more strongly than expected.  Former Finance Minister Kudrin, a consistent pessimist about the Russian economy from within the government who is however also [central banker] Nabiullina’s strong ally, is now predicting GDP growth to rise to 3.5% by 2019, reaching the target rate of 4% by 2021.

Meanwhile,  The Duran reports that “According to a new report released by the Austrian Institute of Economic Research (WIFO), losses from EU anti-Russian sanctions and Russian counter sanctions have been calculated at 17,6 billion euros in 2015, and have cost Europe 400 thousand jobs.”

“In compact Austria the job loss figure stands at 7000, while in Germany nearly 100,000 jobs are believed to have been affected.”
So it looks like the EU policy on Russia – pushed by Washington – has backfired on them.  Russia has shown admirable stamina since 2014 and appears to be headed for a rally, while the EU’s economy is stumbling with nothing positive to show from all this.