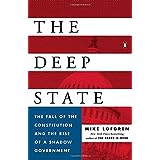 With the term “deep state” getting a lot of mileage these days with respect to the take-down of Trump’s original National Security Advisor, Michael Flynn, it seems like a good time to draw your attention to the  origins of the term.   Mike Lofgren, a former congressional staffer and defense analyst, wrote a book with that title a few years back.   Below is a link to a 26 minute interview that Bill Moyers conducted with him.

A synopsis of the interview:

Mike Lofgren, a congressional staff member for 28 years, joins Bill Moyers to talk about what he calls Washington’s “Deep State,” in which elected and unelected figures collude to protect and serve powerful vested interests. “It is how we had deregulation, financialization of the economy, the Wall Street bust, the erosion or our civil liberties and perpetual war,” Lofgren tells Moyers.

As one of the YouTube commenters, tsbrownie, described it:
“It’s a conspiracy of common interests. The elite don’t have to hold meetings nor have secret handshakes. All they have to do is all work to the same goals with loose coordination via news media, and like a team of ants, bit by bit they can move our great country anywhere they want.”

For those who’d rather read Lofgrens’ essay explaining the concept, go here:

One thought on “The Deep State”