Due to a lack of natural barriers, such as oceans and mountain ranges, Russia has a history of invasions from all different directions, particularly from the west.  Within the span of 25 years  in the first half of the 20th century, Russia was invaded twice by Germany.  The Soviet Union suffered up to 27 million deaths – 19 million of them civilians – in order to fight off the Nazis, according  to ethnographer Michelle Parsons, and a third of the country was destroyed.

For a sense of perspective, the U.S. suffered 400, 000 deaths and saw no fighting on its territory during WWII (except for the attack at Pearl Harbor).  The U.S. has a vast ocean on either side and relatively friendly neighbors to the north and south as well as possession of a nuclear arsenal since 1945.  This has all likely contributed to the fact that the U.S. has not experienced a war on its soil for over 150 years – and that did not involve a foreign invasion.  This, no doubt, has shaped a certain mentality about war in American culture, the fact that we have been pretty insulated from it.

On the other hand, Russia’s mentality has been shaped via a history of violation, destruction and loss of life on a level that would be difficult for the average American to wrap their mind around.

It was 75 years ago today that Adolph Hitler ordered Operation Barbarossa, the invasion of the Soviet Union, a move that would prove the extent of Hitler’s hubris, even going so far as to plan to celebrate the taking of Leningrad at the Astoria Hotel, having actually printed up the invitations.

The aim of Barbarossa was to conquer Russia in the course of a single Blitzkrieg campaign. Hitler and and his generals thought that it would take only a few months to destroy the Red Army, capture Leningrad and Moscow and occupy the western half of the Soviet Union along a line from Archangel to Astrakhan.  “The world will hold its breath,” said Hitler as he reassured his generals that all they had to do was kick the door in and the whole rotten structure of the Soviet communist system would collapse.

Another history professor, Michael Jabara Carley, at the University of Montreal, adds that British and U.S. intelligence virtually agreed with Hitler’s assessment that the Soviet Union would fall quickly in the face of the Wehrmacht.   He also details how it was the Soviet Union that eventually, in British Prime Minister Winston Churchill’s words, “tore the guts out of the Wehrmacht,” despite the subsequent American narrative that it was the U.S. that primarily won WWII in Europe.

[Germany] made large territorial gains but at the loss of an estimated 7,000 casualties a day. This was a new experience for the Germans who until then had destroyed every adversary they faced with relatively little loss to themselves. Poland was essentially beaten in four days; France, in six. The British army was run out of Europe, first at Dunkirk, where it left all its arms, and then in Greece and Crete which were fresh British fiascos. There were also others later on in North Africa. The Wehrmacht was finally beaten at the battle of Moscow in December 1941, long after British and US intelligence said the war in the east would be over. It was the first time the Wehrmacht had suffered a strategic defeat….

1942 was another year of sorrow and sacrifice for the Soviet Union. Everyone knew that the Red Army was carrying the main burden of the war against Germany.

In the autumn Soviet forces fought with their backs against the Volga in Stalingrad. Someone said Stalingrad was Hell. «No, no», another replied, «it was ten times worse than Hell». The Red Army won this ferocious battle, and the last German soldiers surrendered on 3 February 1943, fifteen months before the Normandy landings in France. On that date there was not a single US or British division fighting on the ground in Europe, not one. In March 1943 the tally of German and Axis casualties was enormous: 68 German, 19 Romanian, 10 Hungarian and 10 Italian divisions were mauled or destroyed. That represented 43% of Axis forces in the east. Many historians and contemporaries from clerks in the British Foreign Office to President Franklin Roosevelt in Washington thought that Stalingrad marked the turning of the tide of war against Hitler. 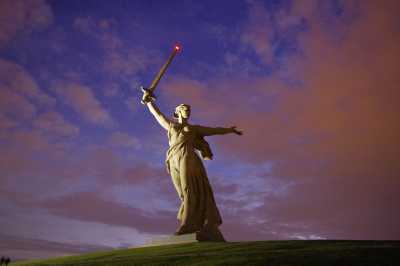 Carley also challenges the oft-cited accusation against the Soviet Union that it freely chose to enter into the 1939 Non-Aggression pact with Hitler instead of negotiating with what became the Allied powers to oppose Germany.

In May 1939 [Soviet Foreign Minister Vyacheslav] Molotov even offered support to Poland, quickly rejected by Warsaw. Had the Poles lost their senses; did they ever have any? When British and French delegations arrived in Moscow in August to discuss an anti-Nazi alliance, you might think they would have been serious about getting down to business. War was expected to break out at any time. But no, not even then: British instructions were to «go very slowly». The delegations did too. It took them five days to get to Russia in an old, chartered merchantman, making a top speed of 13 knots. The British head of delegation did not have written powers giving him authority to conclude an agreement with his Soviet «partners». For Stalin, that must have been the camel breaking straw. The Nazi-Soviet non-aggression pact was signed on 23 August 1939. The failure of the negotiations with the British and French led to the non-aggression pact, rather than the other way around.