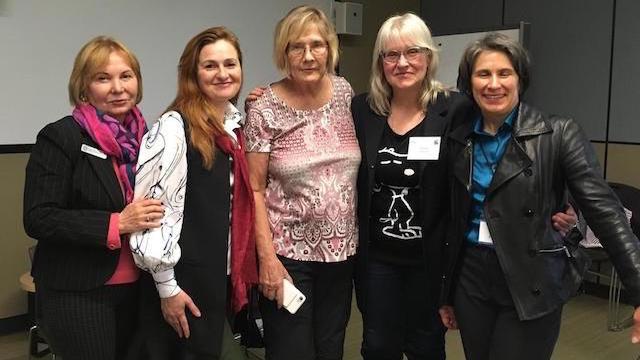 “No, I will not tell you about war.  It is disgusting and should never happen,” Lena recalled her father telling her when she was a child and would ask him to tell her tales of his experience in the Great Patriotic War – as WWII is known in Russia, which took the lives of 27 million Soviets.  Lena, a wife, mother, and teacher of English and German, who is originally from Western Ukraine and lives in Yekaterinburg in the Ural Mountain Region of the Russian Federation, was the first of four ladies from Russia to speak at the RMMA event in Walnut Creek, California on April 5th.

In her opening remarks, she explained the reason for her involvement in the program.  it was her father’s words that had inspired Lena to work for peace and the prevention of war.

Prior to Lena’s comments, Sharon Tennison of the Center for Citizen Initiatives introduced the evening’s 4 visitors from Russia and the history of the program that had brought them there.

Tennison’s earlier program in the 1980’s, during the first Cold War, brought groups of non-Communist Party Soviet citizens to visit Americans across the United States.  The Soviet visitors stayed in the homes of volunteer Americans for several days during their stay in a particular city.  During their visit, the Soviet citizens would meet community leaders, members of the media, business people and average Americans – who could all see for themselves that, in most important ways,  these were just people like them.  Groups of Americans had already visited the Soviet Union for the same people-to-people outreach, which had enabled Tennison to network with Soviet citizens.

With tensions between the West and Russia at an all time high in the post-Soviet era, Sharon has resurrected the idea.  After visiting Atlanta and two cities in Texas, the four Russian ladies were now touring the San Francisco Bay Area.

The second lady was Tatyana, who has lived in Crimea all of her life, the daughter of a Ukrainian mother and a Russian father.  She teaches English and history.  I met Tatyana during my trip to Crimea in October of 2015 .  For her opening, she spoke of the monument that was just erected in Yalta to FDR.  Yalta was, of course, the location of the famous conference of the “Big Three” (FDR, Stalin and Churchill) as WWII was winding down in 1945.  She wanted to remind others of the wisdom of FDR, who as U.S. president during WWII, was allied with the Soviet Union and treated the country and its leadership with respect, and hoped to work toward a peaceful post-war coexistence, despite ideological differences.

The third lady was Natasha from Krasnodar, a mother and business woman with experience in the agricultural industry.   I had also met Natasha on my October 2015 trip.

The fourth speaker was Ilyana, a wife, mother and hydro-engineer from St. Petersburg.

Lena, Tatyana, Natasha and Ilyana all took over an hour’s worth of questions from the audience, which filled the conference room, with probably 60 or so in attendance.  The most heated topics seemed to be the Crimea issue and internal Russian politics – particularly gay issues, media/propaganda and Putin.

When Tatyana attempted to provide a local, on-the-ground experience of what happened in Crimea during and after the Maidan protests and the illegal deposing of the democratically elected president of Ukraine at the time (Yanukovich) – which did not comport with the mainstream western media depiction – one woman in the front row shook her head and made it clear that she was not very open to Tatyana’s narrative.

When the subject of the recent presidential elections in Russia in which Putin won ~76% of the vote, an even better showing than was expected, a couple of audience members suggested that the elections were not free and fair.

Lena explained that there were 7 parties in Russia and that Putin ran as an independent.  All four ladies attempted to provide the audience with an explanation of why Putin is so genuinely popular in contemporary Russia, describing the chaos, criminality and massive poverty of the 1990’s (referred to by many Russians as “the crazy 90’s”) and the stability, lack of external debt, economic resurgence, decline in street crime, and renewed pride that the Putin era had brought.  One of the ladies, who admitted she did not vote for Putin, agreed that there was not yet a credible alternative to the current Russian leader.

In response to more questions about the allegedly poor state of human rights in Russia, Lena explained that each region of Russia had an advocate for human rights and children’s rights that citizens could appeal to.  The advocate would investigate the cases and serious issues were brought straight to the attention of the Russian president.

One member of the audience asked about the political opponents of Putin who seemed to mysteriously end up dead.  All of the ladies expressed skepticism at the claims of Putin being behind the deaths and cited the lack of evidence provided to substantiate the claims.  After pointing out that Russia was a very wealthy country with abundant natural resources, Ilyana asked the audience, “Who has an interest in portraying Putin this way?”

Naturally, the issue of media and propaganda came up with suggestions by one audience member that the Russians were subjected to propaganda.  The ladies explained that there was a diversity in the Russian print media and that Russians had access to international media, including American, via satellite and internet.  Ilyana asked the audience to consider the following:  “Who owns your media?  Do these owners have interests?  What are their interests?”

In response to another question on this, Tatyana explained that the New York Times Moscow bureau would periodically come to Crimea to report.  But they would talk only to a few people who represented about 5% of the viewpoint in Crimea, but they portrayed it as though it represented 100%.  “You see, they did not lie, but they distorted.”

One audience member pointed out that our revered NYT had promoted on its front pages what amounted to government-sourced gossip about Iraqi weapons of mass destruction that led to a million deaths and the destabilization of an entire region.  He also added a cautionary note about believing unsubstantiated claims of political murders in far-away foreign countries.  “What if someone from another country believed the rumors and gossip about the Clintons being behind the death of Vince Foster and Seth Rich without evidence presented?”

On the topic of propaganda, Lena stated:  “I don’t think I’m brainwashed.  I live in Russia [and know what it is like there].  I don’t want to leave my country.  But I also have a son here in the U.S. and a grandson and a lovely daughter-in-law.  My heart is with you [America], but it is also with Russia.”